How Pitchers Of All Ages & Levels Can Use This Secret To
Instantly Gain Command of The Zone!

From the mind of Coach Tony Robichaux, comes the much anticipated
Pitching To Colors System!

Now Available To The Public For The First Time Ever!

Invented by late Coach Tony Robichaux to reinforce his pitching philosophy and make it tangible, easy-to-grasp…and visual for his pitchers

Lets you instantly coach command (and gives you results right away)

Now you can too can train your pitchers to do it by using this simple training tool!

It all started in the backyard and on a baseball field in Southwest Louisiana more than 20 years ago. This is where our Father & Son transformation begins as well as the journey of Pitching To Colors. Who would have guessed that a simple idea/principle that was based on the ability to make an adjustment would be the foundation for his pitching philosophy? A philosophy that would eventually be transformed into a full-fledged pitching system used by some of the greatest pitching staffs in Division 1 College Baseball... as well as all across the NCAA, MiLB and MLB!

In its purest form, the colored plate was a tool our father designed to teach pitching and make his philosophy something tangible that was simple, easy to understand, and visual. When it came to pitching, our dad was focused primarily on one thing: Command.

He wanted his teams to be able to command every inch of the plate and fill up the strike zone and that’s exactly why he designed the colored plate system, with the end user in mind. The colored plate was the teaching mechanism he used in the bullpen to help pitchers understand the strike zone, how to attack hitters, and the purpose and intent behind everything he asked them to do… and from there, how to transfer that onto the mound to control the outcomes in the actual game: Inducing hitters, manipulating contact and managing YOU to collect outs.

It was our father’s vision to make this system available to the public, and while he is not with us physically, his hand is on this and we are so honored to be able to introduce the Pitching To Colors System to you on his behalf. 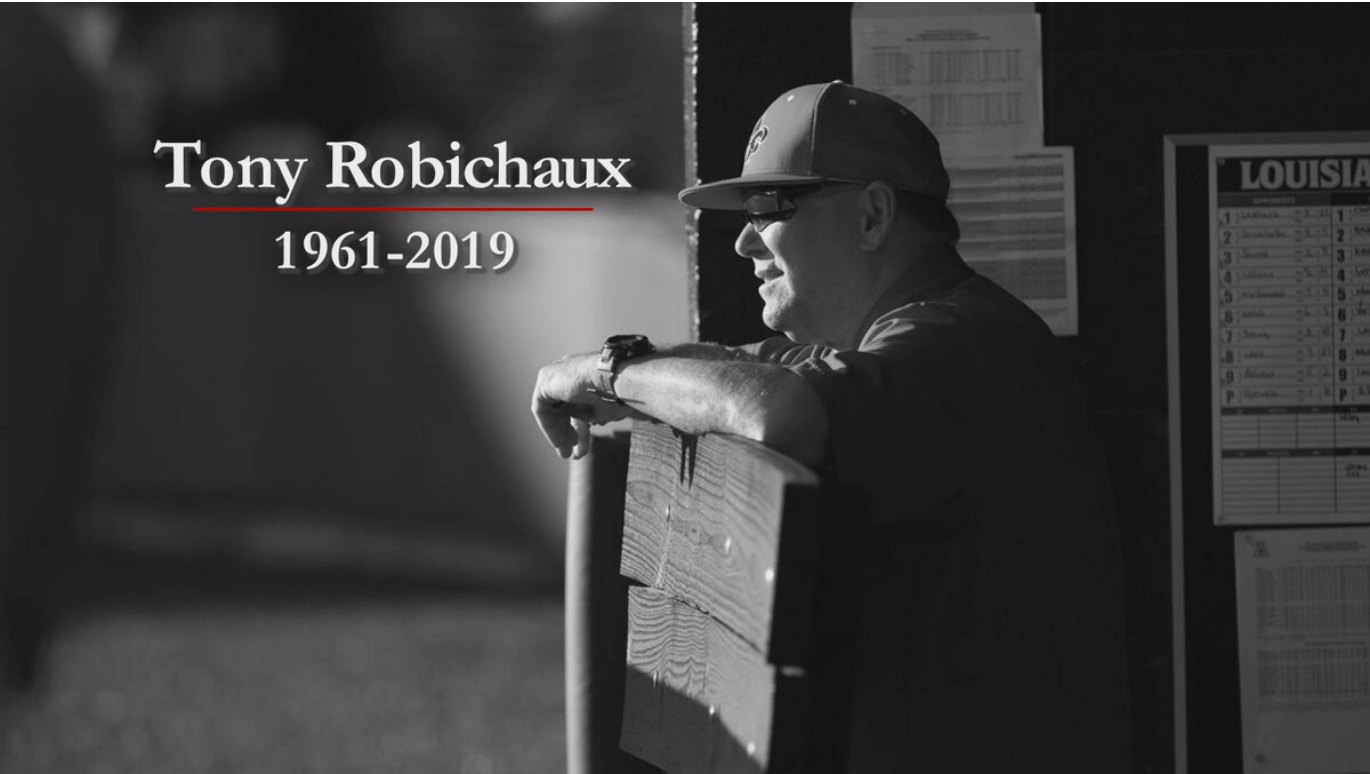 Here is the letter Coach Robe wrote to introduce The Pitching To Colors System:

Pitching To Colors: Color Your Way To Command, was created for every coach that ever yelled at his pitcher to "Just Throw Strikes!"

This method of training was also designed for all the coaches that also said:

Lastly, it was designed for all the coaches that also had to prevent the worst thing that could happen.. losing a game because of a walk.

The bottom line is Base-On-Balls or Free Bases lead to losing, because it takes less hits to score runs. It is our goal that with the Colored Plate and The Pitching To Colors System that you will be able to "Color Your Way To Command".

Yours In Baseball,
Tony Robichaux

Coach Robichaux’s Colored Plate design has evolved over the years as he was meticulous in finding the perfect shape & dimensions... The prototypes took many different forms… from cardboard, to wood to plastic, but ultimately, we landed on the synthetic rubber material (shown above) due to durability, light weight, no slide, and of course, it’s very portable.

In addition to the Plate, you're also getting:
The Pitching To Colors Digital Training Program

Available for the first time ever… this training system includes all of the teaching material, drills & demonstrations you need to Color Your Way To Command!

The Pitching To Colors Training Manual 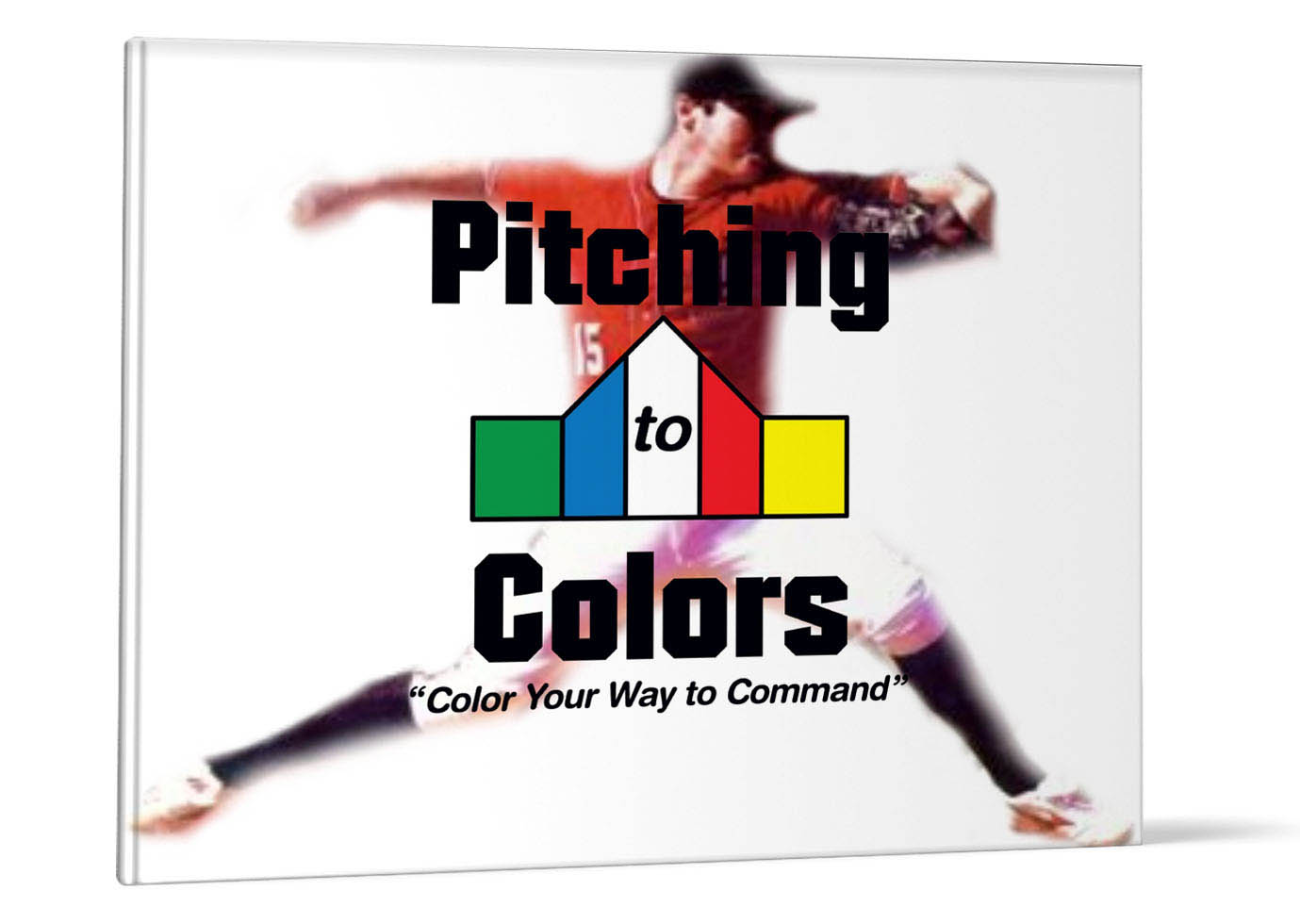 Created by Coach Tony Robichaux, this manual explains the WHY and the HOW behind the color plate. It also breaks down what each colored plate section means for RHP and LHP's...

The Pitching To Colors Video Series 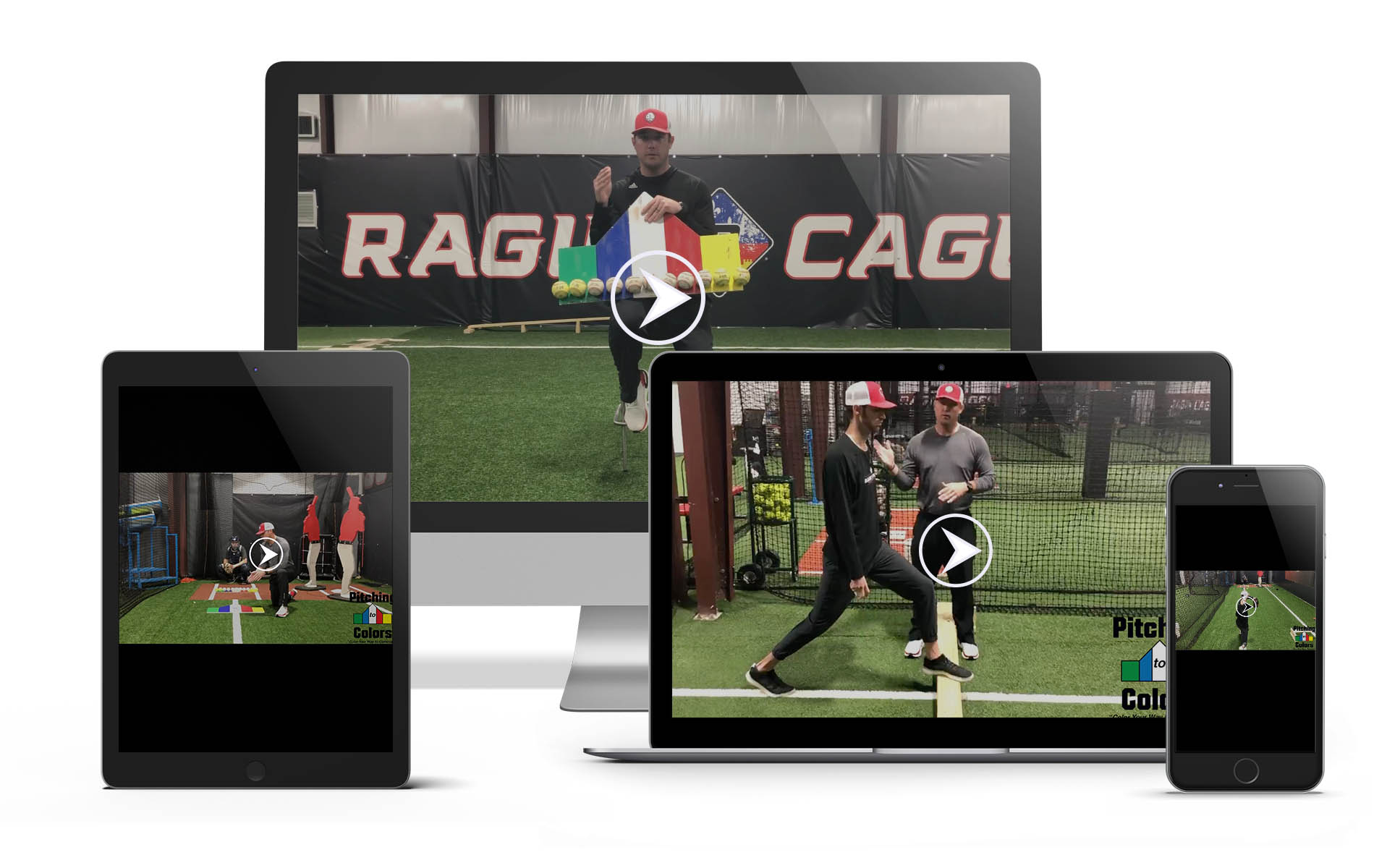 In this 6 part video series, Justin & Austin Robichaux teach and demonstrate their father's flat ground and drill series progressions with the colored plate. PLUS: Justin takes you through the intent based principles behind why the plate works and how to execute fastballs, breaking pitches and change-ups when throwing to the colored plate. 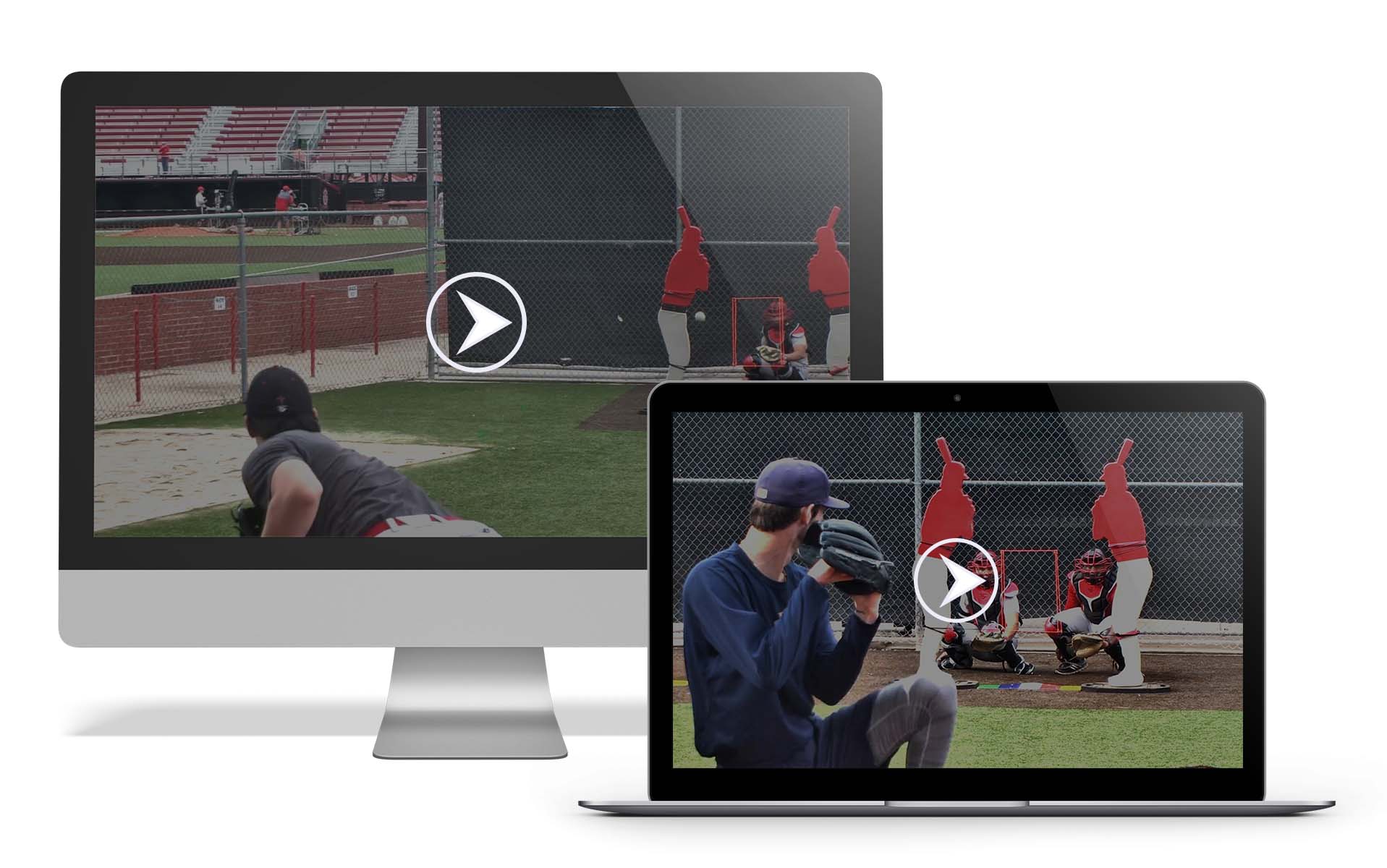 Here's just a taste of what you're going to learn...

→  The single, critical key for pitchers to gain command (Get this simple concept and it will change everything for you!)

→  15 things every coach must know to train a pitcher to locate his pitches (Watch as he hones in on his spots like a heat-seeking missile!)

→  A common mistake even professional coaches make that almost guarantees your pitcher won’t execute when you need him to! (Please….don’t do this!  Refer to page 6 of the manual for what to do instead.)

→  A scientifically proven way to train command without changing the mechanics of his throw! (This simple-yet-powerful scientific principle is the basis of Coach Robichaux’s secret for rapidly improving his pitchers)

→  Hall Of Fame Coach: 7 qualities that define every pitcher

→  The special ingredient without which no pitcher can succeed (You can have talent and you can have technique, but unless you use this too to your advantage, your pitcher will be average at best)

→  A complete breakdown of what each color means for both right-handed and left-handed pitchers (For instance, is your left-handed pitcher missing his fastball up and in 4 seam?  You’ll be able to show him INSTANT FEEDBACK on how to correct it!)

→  4 instantly effective ways to train your pitcher to hit his spots!

→  How to throw a fastball, sharp breaking ball, or change up for the maximum number of strikes every time! (Follow these quick start steps and he’ll be an absolute beast on the mound!)

→  An exclusive look into the coaching system that allowed Tony Robichaux to help Louisiana lead the SBC in ERA no less than 14 of his 25 seasons with the team!  (Best part: it’s simple too...like the pitching version of paint-by-numbers!)

How many plates would you like us to mail you?

PLUS: If you order today, you’ll also receive these exclusive Pitching To Colors Bonuses:

PLUS: If you are one of the first 100 to order, you’ll also secure a seat to a Virtual Zoom P2C Training Session and Q&A! 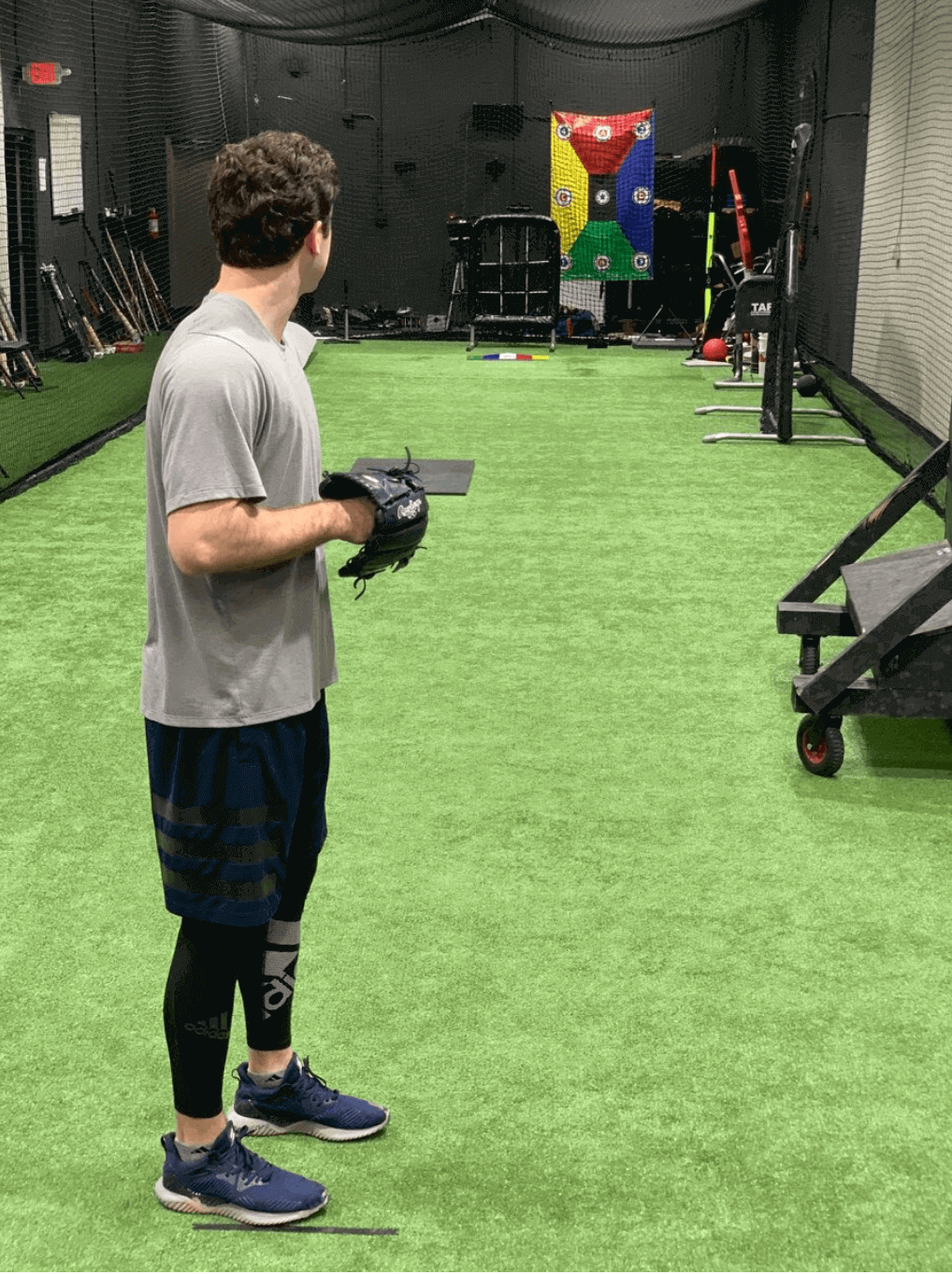 Here's what others are saying about Pitching To Colors... 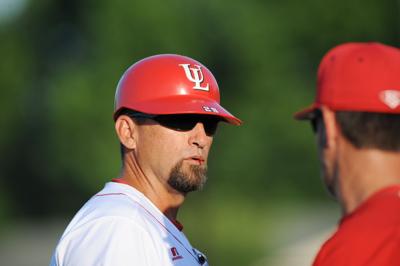 “Simple with immediate feedback... Pitching to Colors is the best tool I have ever seen for the development of ‘pitchers’.

Coach Tony Robichaux was not only a great head coach & leader of men... he was a master pitching coach—- with a simplistic yet innovative Approach, Coach Robe was always ahead of his time yet grounded in the fundamentals in the art of pitching. Command, movement and the ability to change speeds are what separate the men from the boys on the mound... the guys that pitched for Coach Robe always had all three of these. I bet if you asked any of them the #1 tool for their development: the answer would all be the same... Coach Robe and Pitching to Colors!” 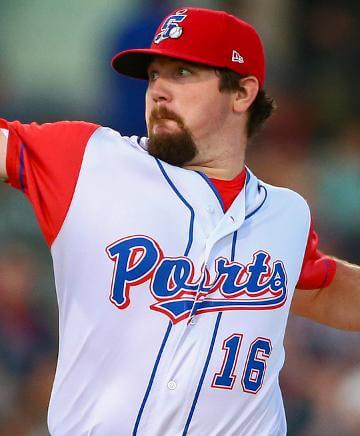 “I can honestly say that the colored plate and Robe’s pitching philosophy changed my life. I went into UL as a thrower and left as a pitcher. The plate taught me there is much more to pitching than throwing hard anywhere over the plate. I have to be able to spot up if I want to be successful in this very difficult game, and the colored plate was able to give me a legitimate mentality for doing so.

Coach Robe and his philosophy/pitching style is the greatest coaching that I have ever received hands down. He would hammer keeping it below the string (the knees), and when I tell you that is ingrained in my brain forever, that is not an exaggeration. He would also do everything he could to teach you to learn how to read a hitter, the at-bat, the body language, and especially the timing of the hitter. These all come together, giving me the opportunity to sequence pitches throughout the at-bat, and I truly believe that I could not have learned how to do this near as well as I did without Robe and the colored plate.

When in the bullpen, I use the plate as my reference, and with doing so, I am constantly thinking which color I intend on throwing each pitch. With this tool, I was able to visualize the colors in game to give myself a smaller target and give myself a reference point for my sequencing that at-bat. The colored plate is a phenomenal tool, and I cannot recommend enough that every single baseball team in America need some if they want to give their pitchers the opportunity to be elite.” 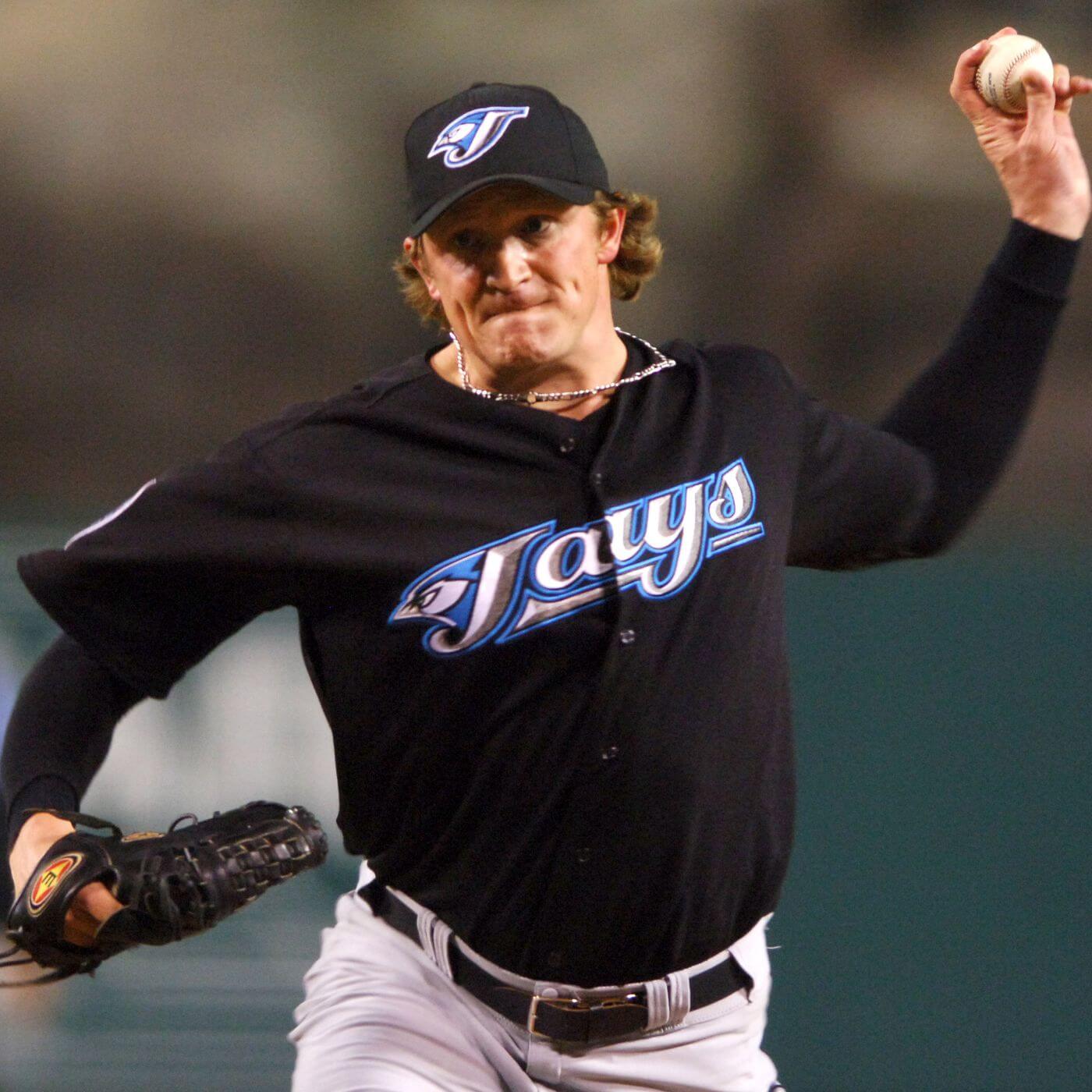 “Pitching to Colors was a staple in Coach Robe’s pitching system for decades. As a player who went through the system and now on the coaching side, I have insight on how valuable a tool this can be. Simple and effective - the colored plate gives immediate feedback with visual references. Learn to command the fastball and manipulate pitches by color. Pitching to Colors is one of the best tools for development and one that we use daily.” 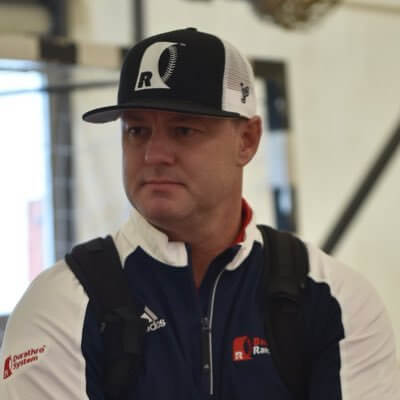 “The Pitching To Colors system is a fantastic tool to help pitchers develop command and enhance their pitchability. I first heard Coach Robichaux talk about it in the mid 2000’s, and I have been using a version of it ever since. It is phenomenal at providing players with a visual representation of a lane where they are trying to execute the pitch, and gives the player instant objective feedback of whether or not they did. This immediate feedback provides the player with a more effective and efficient training environment. It helps pitchers understand how to divide up the plate into different zones. The plate and system can be used in drill work, flat grounds, bullpens, inter-squads or live at bats. The method behind the system is practical and easy to understand, and really helps make a pitcher’s arsenal complicated for the hitter.” 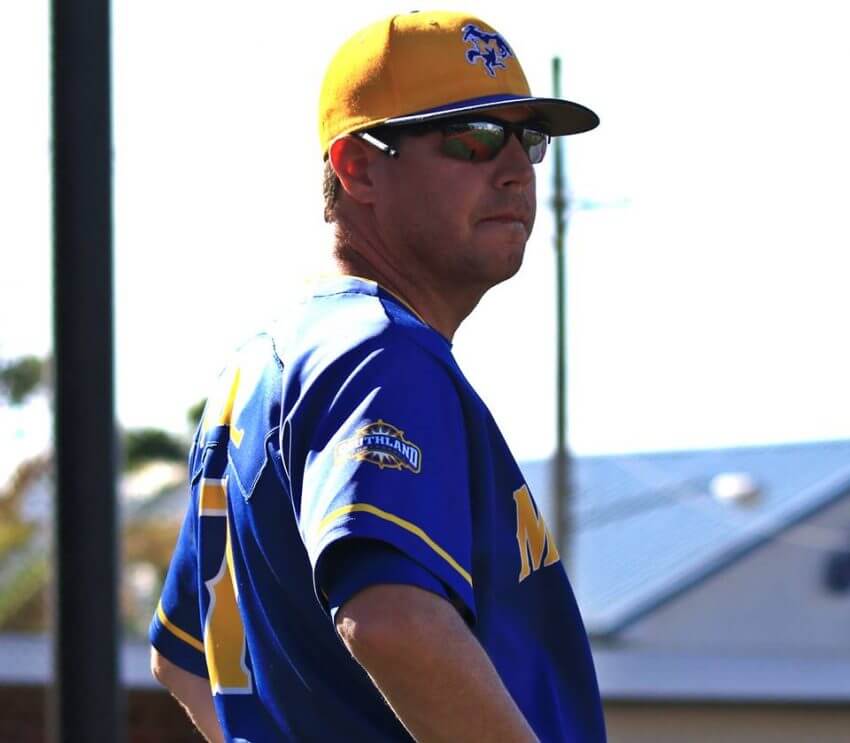 “I’m so glad that Justin is continuing his dad’s teachings. Tony was always willing to share his ‘secrets’ with anyone who was willing to spend half a day with him. I had numerous visits with Robe that lasted well beyond a few hours - time flew by & I was always left wanting more. His teams were always known for their toughness and ability to pitch. This is usually where the conversation began, but it always ended up somewhere deep in your soul. That man could bait & set a hook better than anyone.

The Pitching To Color Colored Plate has been copied by many, but just having a new gadget won’t make a better player or coach. Understanding its purpose, how to use it and the willingness to commit to the work - that’s the secret. I can’t think of a better person to learn from than the kid who grew up at the ballpark next to his dad.” 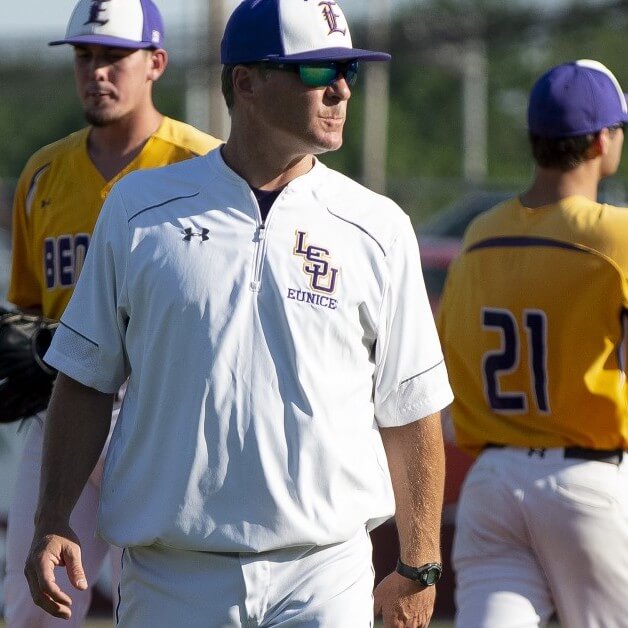 “Coaching in college for the 16th year now, I’m constantly looking for ways and means to improve pitcher’s command.

In a world enamored with velocity; and more guys throwing harder every year, I have found that the Pitching to Colors home plate is the best training tool to assist our pitchers to improve command.

The plate gives pitchers a visual for location by color for where they want to throw the ball. Then, based on the result of that pitch, the same visual by color lets them see how to adjust for the next pitch in the event of a missed location.”